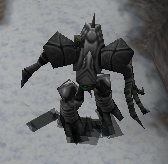 The Hedoth Combot is a enemy unit found primarily in the Campaigns of Metal Fatigue and is the single most deadliest unit in the game.

Belonging to the Hedoth race, the combots are very strong untis capable of leveling entire bases by themselves if left unchecked. Thankfully they never seem to stray from the hedoth structures they are generally patrolling. Their health regenerates over time and both defence stats are set at 90.

The Torso comes equipped with a powerful energy weapon and acts in the same manner as the other Projectile Torso's.

Depending on the Level you encounter the Combot it might have both a Multi-claw and a Proto-Blaster, if this is the case then expect heavy resistance as the ranged weapons can deal severe damage to your units before they can get close.

If you can get your hands on any Hedoth combot parts then you will have an advantage over your opponents.

Even though Hedoth parts are very strong they take a long time to research and produce, keep this in mind.

Retrieved from "https://metalfatigue.fandom.com/wiki/Hedoth_Combot?oldid=5294"
Community content is available under CC-BY-SA unless otherwise noted.